In 2011, the research project on Cordyceps was successfully defended by Ms. Nguyen Thi Hong – a young scientist at the Science Council of Hanoi. After that, Thien Phuc Herb Joint Stock Company was established, officially marking the first Science and Technology enterprise in Vietnam to successfully cultivate Cordyceps.

Cordyceps is a precious medicinal herb from a thousand years ago. The nature of cordyceps is a parasitic form of the fungus Ophiocordyceps sinensis on the larvae of some butterflies in the Thitarodes genus.

Through scientific analysis, cordyceps contains up to 17 amino acids and various trace elements. Among them, there are many active ingredients with high medicinal value such as cordiceptic acid, cordycepin, adenosine, hydroxyethyl-adenosine, and group HEAA (Hydroxy-Etyl-Adenosin- Analogs).

Long time ago, Oriental medicine has used cordyceps as a medicine to treat the diseases related to the kidneys, lungs as well as many other difficult to cure diseases. Moreover, this is a very benign herb, causing no side effects, so it can be used by almost everyone. It can be said that the benefits of cordyceps are very good for health.

It’s so valuable but the amount of cordyceps in the wild is extremely rare and difficult to exploit. Therefore, not everyone could access to and use this herb.

Since knowing about cordyceps, Ms. Nguyen Thi Hong – a young scientist has constantly wondered how the community can use real products with the most reasonable cost. Because of those thoughts, she began to tinker and research to find the most suitable culture formula. After 3 years of tinkering with many failures, Ms. Hong successfully built a closed cordyceps farming process with an area of over 2000m² in Dan Hoa commune – Thanh Oai – Hanoi.

However Ms. Hong isn’t stopping there, she and many other scientists continued to improve and expand the scale to bring the product closer to the market. In order to realize the dream, Thien Phuc Herb Limited Liability Company and later Thien Phuc Herb Joint Stock Company were established, becoming the trusted name of many Vietnamese consumers when there is a need for cordyceps.

In 2013, after 2 years of continuing research and development, Thien Phuc has completed the technological process of introducing cordyceps farming on an industrial scale in Lam Dong and Hanoi. Until now, Thien Phuc cordyceps products have been present in all provinces and cities in Vietnam as well as receiving the trust of foreign customers.
With strict production processes and quality products, Thien Phuc increasingly meets the needs of customers. 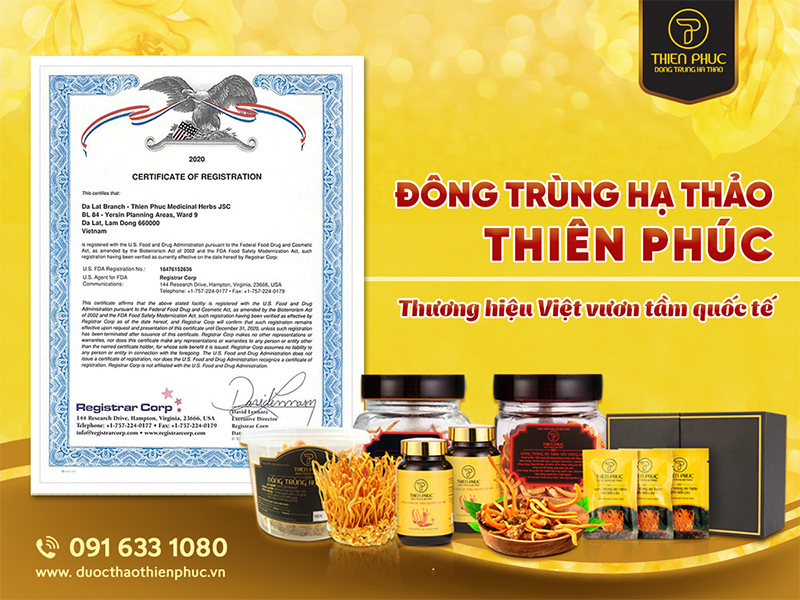 In order to produce a cordyceps product, the production process as well as quality control at Thien Phuc are always carried out carefully and meticulously. 100% of Thien Phuc cordyceps after harvesting are brought to the Vietnam Academy of Science for analysis and evaluation. Currently, the results of analysis of cordycepin – an important chemical that regulates the value of cordyceps reaching 4.4mg/g, is similar to natural cordyceps up to 65% – 70%. Besides that, the infection rate of the obtained product is much lower than that of natural mushrooms because it is grown under sterile conditions.